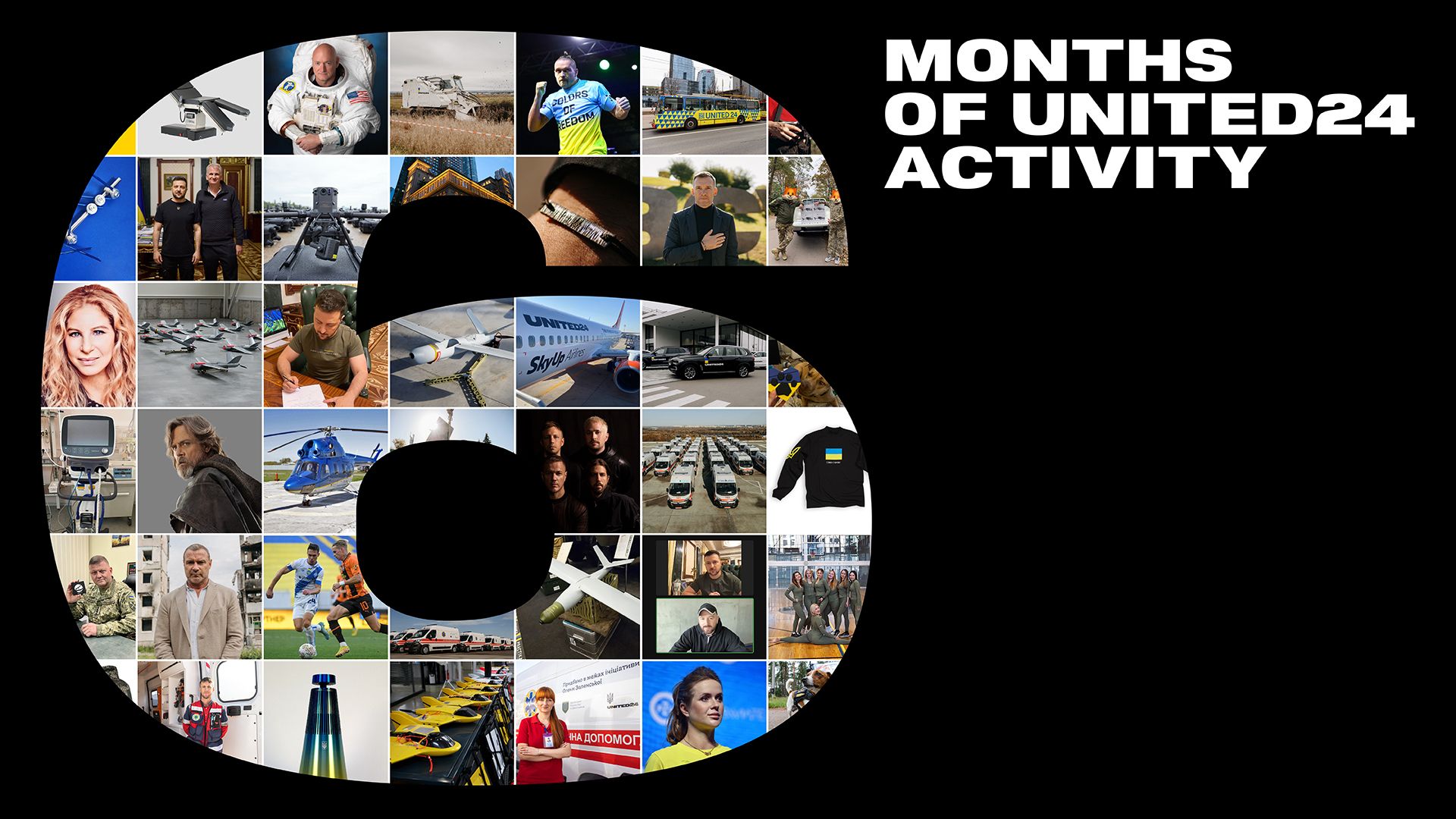 UNITED24 Fundraising Platform Reports on 6 Months of Activity: Over $217 Million in Donations, 10 Star Ambassadors, Dozens of Partnerships, a Helicopter, Reanimobiles, Drones, and the Largest Demining Vehicle in the World

On May 5, 2022, the President of Ukraine, Volodymyr Zelenskyy, launched the UNITED24 fundraising platform. In 6 months, more than $217,000,000 in contributions (almost 7 billion UAH) was transferred to the NBU accounts by international companies, both global and Ukrainian businesses, charitable organizations, world-famous stars and donors worldwide.

With the funds accumulated via UNITED24, a medical helicopter for evacuation, the first demining vehicle in Ukraine, more than 1,400 drones, 90 C-class ambulances, as well as hundreds of pieces of medical equipment and gear for Ukraine’s defenders have already been purchased.

“In 6 months, UNITED24 united hundreds of thousands of people worldwide to help Ukraine,” said the President of Ukraine, Volodymyr Zelenskyy. “We are grateful to everyone not only for supporting us with donations, but also for supporting our values, for believing in Ukraine and our victory. We feel how the world is rooting for Ukraine, and this gives us strength to fight.”

UNITED24 has brought together 10 star ambassadors. Each of them focused their efforts on 1 of the 3 platform directions. Ukrainian athletes, Andriy Shevchenko and Elina Svitolina, American actor, Liev Schreiber, Imagine Dragons band, singer and actress, Barbra Streisand, astronaut, Scott Kelly, are promoting Medical Aid. Thanks to this support, the Ministry of Health of Ukraine managed to purchase important medical equipment, including ALV devices, X-ray C-arm machines, anesthesia machines and operating tables. Ambulances were one of the largest batches among the purchased items; their fundraiser was launched by the First Lady of Ukraine, Olena Zelenska. Right now, astronaut Scott Kelly is raising funds for even more ambulances, and you can support him here: donorbox.org/scottkelly.

Defence and Demining is promoted by actor Mark Hamill, who portrayed Luke Skywalker in the Star Wars franchise franchise. He supports the Army of Drones project. In total, 1,423 UAVs have already been purchased under this program. Historian Timothy Snyder also recently announced the ‘Shahed Hunter’ fundraiser. This is a system for countering enemy UAVs, which russia uses to constantly attack Ukraine’s critical infrastructure. 152,770,290 UAH has already been raised for  such ‘Hunters,’ thanks to the Monobank initiative and blogger Igor Lachenkov. Additionally, as part of Defence and Demining, a MI-2AM-1 helicopter, the first Armtrac 400 demining vehicle in Ukraine, thousands of bulletproof vests and helmets, among other crucial items, were purchased. The full list of these acquisitions can be found on the website: u24.gov.ua.

On the eve of the half-year operation of UNITED24, the first infrastructure project was launched – the reconstruction of Irpin Stadium. This was done under the initiative of Ambassador Andriy Shevchenko, who engaged his former club, A.C. Milan; they have allocated 150,000 euros towards the project. Oleksandr Usyk is another Ukrainian athlete, who supports Rebuild Ukraine, alongside Balenciaga’s creative director, Demna, who is also an ambassador for this direction. The brand has already transferred over €100,000 raised from the sale of the first batch of T-shirts, designed specifically for UNITED24.