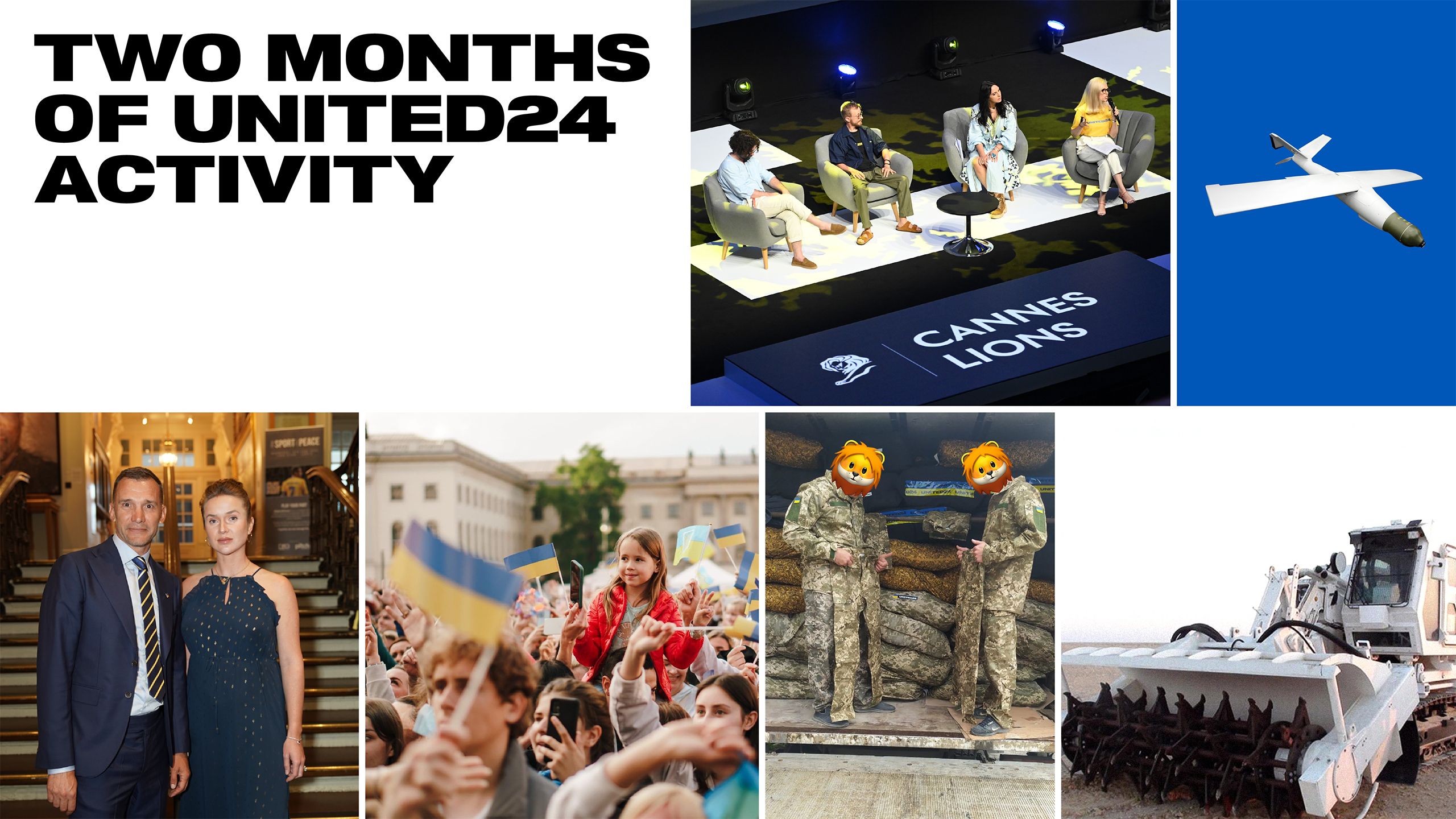 Over $75M in Donations and an Army of Drones Announced: UNITED24 Reports on Two Months of Activity

In June, world tennis star Elina Svitolina joined U24 as an ambassador, and the total amount of charitable donations exceeded $75,000,000 (over UAH 2.2 billion). In addition, the platform announced a separate fundraiser for the world’s first Army of Drones:

“We wanted to create a platform capable of raising funds to support Ukraine in the easiest way possible — with a single click. It’s only been 2 months since we launched it, and we already received donations from 90 countries. U24 has become a simple and effective way for people to help and see the impact of their efforts,” says Deputy Prime Minister and Minister of Digital Transformation, Mykhailo Fedorov. “A few days ago, we launched a separate project, ‘Army of Drones.’ It makes it possible not only to donate towards the purchase of drones, but also to send Ukrainian defenders their own devices. Therefore, drones, that were once filming landscapes , can now be used to defend our country. Just in the first days of the project, we have raised over UAH 200 million, and this amount keeps growing every day.”

The program of the ‘Army of Drones’  project provides systemic drone procurement, repair and timely replacement, as well as pilot training. During the first day, over UAH 84 million was raised to buy drones for the effort.

During the second month of U24 activity, 30 quadcopters were procured to meet the needs of the State Service of Special Communications and Information Protection of Ukraine. Additionally, 20 thermographic cameras and 2,073 sets of field uniforms were purchased for the Services. In addition, servicemen have received: 65,000+ sets of military uniform, 68,000+ sets of underwear, over 15,000 hats and 6,000 pairs of shoes. More than UAH 18,000,000 was allocated to the purchase of the Armtrac 400 — the most efficient demining vehicle of its kind.

The Ministry of Health of Ukraine purchased surgical C-arm X-ray machines. The first five units will be sent to the front-line territories in Dnipropetrovsk, Zaporizhzhia, Kharkiv, Sumy, and Mykolaiv oblasts. Five more will go to military hospitals. The total cost of these systems is UAH 26,800,000.

Funds for these X-ray machines were partly raised during charity telethons. One of them, ‘Embrace Ukraine — #StrivingTogether,’ took place on June 21 in Amsterdam. The viewers donated UAH 2,300,000. Over UAH 8,300,000 was collected during two other telethons.

Actors of the Kvartal 95 Studio have been raising donations for medical needs, too. They managed to collect over UAH 3.5 million during a European charity tour. All proceeds will be used to purchase X-ray transparent operating tables for Ukrainian hospitals.

Andriy Shevchenko, an ambassador for the platform, has contributed over UAH 12 million for medical care via U24. Additionally, he will partake in a sports event with his colleague, Elina Svitolina, who became a UNITED24 ambassador in June:

“We are very grateful to Elina Svitolina for joining UNITED24 and for the consistent civic stance she has been actively showing since the first days of the full-scale invasion,” says platform coordinator Yaroslava Gres. “The approval of cooperation with the world’s no. 1, Iga Świątek, was another important event for us. On July 23, together with other tennis stars, she will play in a charity match in support of Ukraine. Part of the funds raised will be transferred via the UNITED24 platform and directed to the purchase of equipment for children’s hospitals. We continue to engage talented people from different countries in supporting Ukraine. Their voices matter more than ever.”

In June, the fundraising platform was presented at the Cannes Lions International Festival of Creativity, and the U24 team is celebrating their two months anniversary at the Ukraine Recovery Conference in Lugano.