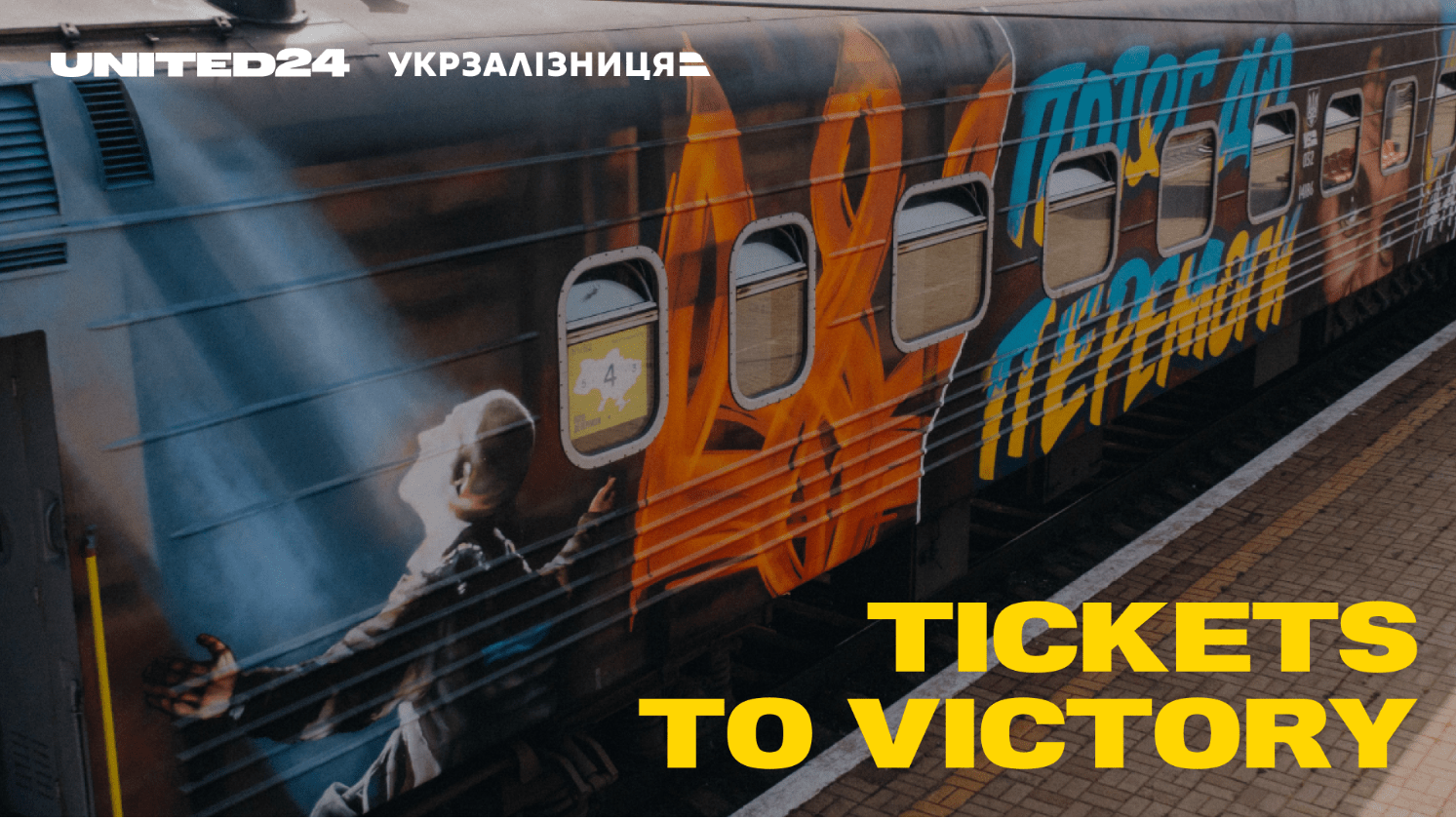 In Honor of the Liberation of Kherson, With a Dream of Simferopol: Ukrainian Railways and UNITED24 Launch Tickets for the First Trains to the De-occupied Cities

Ukrainian Railways and the fundraising platform UNITED24 announced the launch of the “Tickets to Victory” project. Within its limits, everyone can buy a charity ticket for the first three trains from the capital to 5 cities: the already de-occupied Kherson, and also Mariupol, Donetsk, Luhansk, and Simferopol. The routes will be operated by the legendary “Train to Victory,” the carriages of which are dedicated to the feats of people in these temporarily occupied territories.

“Tickets to victory” can be purchased on the website of the initiative’s partners. The route’s opening will take place after the liberation of the city or region from temporary occupation. Twelve hours before the train, Ukrainian Railways will send information about the train’s carriage, location, date and time of departure to the email address specified when purchasing the ticket.

“We thought about a project that would symbolize Ukrainians’ hopes for the fastest possible de-occupation of our cities, faith in the Armed Forces, and hope that all of Ukraine will be liberated,” said Yaroslava Gres, Coordinator of the UNITED24 platform, co-founder of the Gres Todorchuk agency.  “So a “Ticket to victory” can be bought today, kept as a symbol, and used immediately after the de-occupation of the cities. We are happy that the Ukrainian army has liberated Kherson, so it will be possible to use Kyiv-Kherson tickets shortly.”

To buy a ticket, one needs to choose a route, train, and class of carriage, fill in personal data, and make a charitable contribution. Three types of tickets are available — “Platzkart” (couchette car)  for a donation of 1,000 UAH, “Coupe” (compartment car) for a charitable contribution of 2,000 UAH, and “Lux” (luxury compartment)  for a contribution of 5,000 UAH. All tickets are for charity. 100% of the proceeds will be sent via the UNITED24 fundraising platform to purchase last-mile transport – cars that will help connect cities and towns in the de-occupied territories with their nearest railway junctions. And from there, Ukrainian Railways trains will deliver passengers to any point in the country.

“Since February 24, evacuation in Ukrainian Railways carriages has saved the lives of 4 million Ukrainians. Our next goal and task is to return these 4 million homes,”  said Oleksandr Kamyshyn, Chairman of the Board of Ukrainian Railways .” It took us a record 29 days to restore the destroyed bridge in Irpin, we went to Balakliya by train already on the third day after the liberation, and to Kup’yans’k – we didn’t even wait for the restoration of the bridge and developed a multimodal circumvential route. Rail workers are doing their utmost to return Ukrainians to de-occupied Ukrainian lands as soon as possible. Kherson, Mariupol, Simferopol, Luhansk, and Donetsk are next in line because nothing will stop the train whose time has come.”

All routes within the project will be carried out by the iconic “Train to Victory.” The carriages of which are painted by Ukrainian artists in honor of the heroes of the temporarily occupied territories of Ukraine. From August 23, the train traveled through all regions of Ukraine, and in November, it went on an international trip to Moldova. The project is a joint initiative of  Ukrainian Railways and Gres Todorchuk, curated by Katya Taylor.